I was working on a new shape for Second Life today and I got inspired… by something that people should never be inspired to do: Anorexia Nervosa. For those that don’t know: a shape in Second Life determines how your avatar will look, like the shape of their nose and how tall they are. And I most severely stress this: I say anorexia nervosa rather than just anorexia because people need to realize there is a HUGE different between the two. Anorexia a lack of appetite, I have anorexia and have had it for many years; Anorexia Nervosa is a serious eating disorder that can and WILL kill you if you let it. It’s very frustrating to tell someone that you suffer from anorexia and have them laugh at you because you’re not “skin and bones.” But that’s not what I came here to talk about.

I wanted to show what inspired me and what came of it; that being the “No Anorexia” campaign by Nolita and my new No Anorexia Nolita shape. Please be warned that following this jump is the controversial ad for the campaign that features model/actress Isabelle Caro completely nude and showing the affects anorexia nervosa has on the body. If you can’t handle nudity or sensitive topics, please leave. 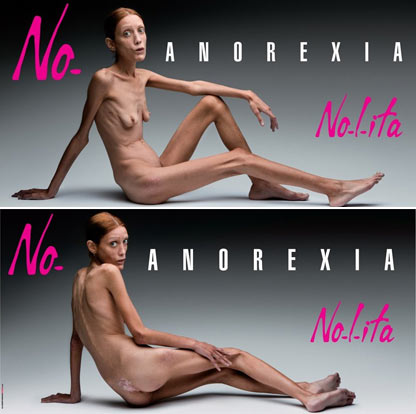 Isabelle died on Nov. 17, 2010 at the age of 29. Her most recently weight was ONLY 73lbs. She was 5ft 5in. In honor of her bravery to stand up and show the world what anorexia really looks like I created my own No Anorexia Nolita shape in her image. Obviously, I can’t get quite the same look as there aren’t any bones in avatars but the idea is the same. This looks wrong no matter the medium.

I have yet to decide what I will do with this shape though as, sadly, there are actually PRO-anorexia nervosa groups on Second Life. It makes me sick that someone would actually promote this as a healthy body image, that they could just over look the deaths of Isabelle Caro, Eliana Ramos (18), Luisel Ramos (22), Hila Elmalich (33), and Ana Carolina Reston (21)… and those are just the recent ones. Each of those girls had a BMI of around 14…. the BMI for starvation is 16. Due to Luisel’s death, in 2006, the Madrid Fashion Week set a minimum BMI of 18 for all models. More recently, many others have begun banning what they like to call “super skinny” (ie. suffers from anorexia nervosa, can’t just say it out loud can we?) models. Its a step in the right direction (a small one, models are still way to damn skinny), but it makes me worry about the “super skinny” model who couldn’t get a job cause she was too skinny. It could very well make her eating disorder worse. I do hope the models they say no to are offered some kind of help and not just rejected, but this is the fashion world… a place known for its bitchery and pompousness.

Anyhow, time to move on from this depressing stuff. I know it’s not going to “just go away” but at least by talking about it a little here I feel as if I have done something positive today. I hope everyone takes a moment to enjoy their bodies, don’t take even one inch for granted. There is a very big difference between being healthy and being skinny, I choose to be healthy and I hope you will join me.

This entry was posted in Second Life and tagged emotions, people, second life. Bookmark the permalink.