So tonight my family officially became a part of the Confederacy. Well, not really tonight, but tonight was the night I discovered our first connection to the civil war and, seeing as my mom’s side of the family is from Tennessee, it’s no really surprise that it’s the Confederacy. For me, when it comes to such conflicts, I stand by my dad’s side of the family which is Swiss.

So the lucky winner is: George Harlan Nix. 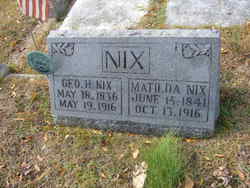 Not really a blood member of my mother’s family but he did marry into it and so that’s good enough for me. He married Elizabeth Matilda Reed (usually went by Matilda), my 3rd great grand aunt. She was the sister of Robert J. (Bob) Reed, the father of Robert Edward (Ed) Reed, who in turn was the father of my great grandmother Vernon Reed.

George Nix was in the 1st Regiment, Tennessee Infantry (Feild’s), K Company. He was a private going in and coming out. Sometime after the war, he applied for a Civil War Confederate Pension. It seems that sometime after he died, his wife also applied as there is a record for soldier (George) and widow (Matilda) in two different counties. A little history:

In 1891 Tennessee established the Board of Pension Examiners to determine if Confederate veterans applying for pensions were eligible. Eligibility requirements included an inability to support oneself, honorable separation from the service, and residence in the state for one year prior to application. The application lists the veteran’s place of enlistment, unit, period of service, battles participated in, and whether he was wounded or captured, as well as place of birth, number and gender of children, and value of personal and real property.

Widow’s pensions were first issued in 1905. These applications show place of birth for widow and soldier, and information about their children. Proof of marriage was required, so marriage licenses often appear in the supporting papers. Other items included are correspondence between the applicant and the Pension Board, letters or sworn affidavits attesting to character and military service, and abstracts of the soldier’s service record furnished by the War Department.

Given that pretty much all of my mom’s side of the family comes from the south, I am sure he won’t be the last soldier I find but it’s always fun to find the “first” one so I thought I would share!

This entry was posted in Genealogy and tagged history, people. Bookmark the permalink.