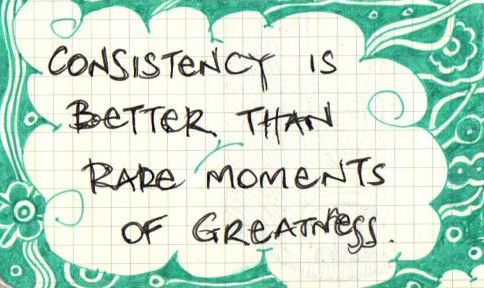 Anyone who knows me well knows that I like watching lots of different tv shows. Recently, though, I have noticed some pretty bad writing errors in two shows I follow so I thought I would bring up something that all writers need to keep track of: consistency. That means: making sure your characters act the same way throughout as well as making sure your sentences don’t go off in random directions from each other. A little inconsistency is allowed, as no one acts the same way every single time, however the examples I am about to present are pretty obviously something that should have been corrected in editing.

Now, the two shows that I want to talk about which are guilty of this are Warehouse 13 and CSI Las Vegas. Lets start with Warehouse 13. For those of you who don’t know the show, it’s about an agency that tracks down objects that become infused with the power and traits of their owners (such as Charles Ponzi’s Money Clip which causes poverty and despair for whoever possesses it. A reference to the fate of con artist Charles Ponzi, who conned millions, but died penniless). The show has recently moved into it’s fourth season and I was quiet happy that it was on again. Yet, by the second episode, I started wondering if I was really going to enjoy this season like I had the other three.

The set up for this is that a character who died in the last season was brought back using one of the infused objects. Now, I like the character (Jinks), but the way they wrote him coming back just really bugged me as a writer. For one, the character who was trying to revive him (Claudia) was, rather suddenly, magically given permission by the higher ups to bring him back which, of course, was against her boss’ wishes. Also, of course, it turned out that this supposed permission was fake. Now, I get the whole fake permission thing, it’s cliche but I get it, what I don’t get is Claudia’s steadfast ‘I am going to bring him back’ and then later comment about how she would kill him if he wanted. To explain a little further: Claudia is having a conversation with Jinks about how she brought him back and says very clearly that she doesn’t care if she ‘messed up his karma or whatever’ but that she would do it again in a heartbeat (basically whether he liked it or not). Not two minutes later she tells him that if he doesn’t like the situation they can easily disconnect him from the object keeping him alive and she would respect his choice. …way to back track there writing staff.

If you want consistency then you can’t have characters just randomly switch sides like that. If their going to do what they want to do and damn everything/everyone else than you have to stick with that. ‘Oh but their trying to show she has a heart…’ I can guarantee you that was not what they were doing. Claudia is a don’t screw with me and mine girl all the way and, while she has been developing more of an empathic attitude recently, when it comes right down to it her character (if we’re sticking with consistency here) would basically say ‘screw what Jinks want, I want him in my life so he is going to be alive.’ And up until her 180 that was exactly her attitude. Now, the idea of her giving in a little is not something that should be thrown out, it’s just that the writers in this sense did a very poor job of portraying that. I can see her saying something like “give it a chance, for me and for everyone else that loves you, we need you”, I can totally see her selfishly bringing him back from the dead and then laying the blame on him “well now it would be like killing yourself and leaving us willingly and that’s selfish.” Remember writers, your characters can change their minds, but they can’t turn on a dime.

Moving on to CSI Las Vegas (if you don’t know the idea behind this show then you live under a rock), this one has to do more with overall character consistency rather than just situational like the above. In this case (no pun intended), the character Sarah Sidle left the crime lab because she could no longer handle the pressures and supposed injustices of the job (like when they must charge a man with murder after he ends his wife’s suffering, who was left in a vegetative state after being brutally raped). This leaving fit in perfectly with her character development up until that point. What didn’t fit is the fact that she came back (I think the next season) and acted like nothing was wrong as she continued to handle the same types of cases. Now I get burn out and needed some time to ‘get back to your old self’ but, if that was the case, than I would at least expect some sort of comment that ties it together. Instead, we get nothing and that nothing creates inconsistency.

Another example from CSI Las Vegas is the case of the character Greg Sanders. I used to love his character, in fact he was one of the reasons I started watching the show in the first place. Recently, however, I came across I forum post that made me realize why I didn’t much care for him one way or the other anymore. The original posted said that he had lost his “edge” and had become rather boring while another poster said ‘it’s called character development.’ Let me be clear: when you strip a character of everything that makes them unique once they change their role within the show, that is actual character UN-development. Basically they took Greg, who was originally a geeky, eccentric, ‘loud music and crazy hair’ type supporting character, and turned him into a mini Nick (another character, who is more your standard male lead with a heart) the moment he stepped out of the lab and started working in the field (this was like within two episodes and ‘old’ Greg was gone). Sure, they have made one (one!) passing reference about how he is “still considered the lab geek with the crazy hair” but, given that we never SEE any of that, it seems rather out of place at that point. When it comes right down to it, the writers created two different characters with the same name and they expect us to believe they are the same person.

The whole point of this is that, as writers, we really need to keep track of how our characters are acting throughout the whole of our stories, especially the longer ones. Inconsistency can be easy to miss so it is also very helpful to ask your readers to point out anything they might notice. Consistency works with development to make characters and stories well rounded and believable. Remember that change happens over time and that all change should come with a reason, even if it’s only mentioned in passing, like the character who likes documentaries and hence knows a lot from the documentaries they have seen (just saying ‘because she/he does’ is not a reason, it’s an excuse for poor writing). Please just pay attention; it might sound like a cool scene, but take a step back and really look at everything from a non-author stand point. As authors we tend to think we know everything about how our characters would react and so on, but that can actually drag us down so be sure that you’re not doing something just because you want to do it but rather because your character would.

This entry was posted in Writing and tagged creativity, show. Bookmark the permalink.

4 Responses to Writing and the importance of consistency