Hockey is a seemingly strange love for a babe born on the sunny shores of Galveston, Texas, but my heart -and my family- have always been solid, snowy Michiganders. My mother would disagree of course, as she would prefer if winter was the same as summer, but snow and ice have been a part of my family for a long time and it was only when I started getting into genealogy that I learned the true reason why hockey held such a special place in my heart. Turns out it’s not just a love for the game, it’s figuratively in my blood. 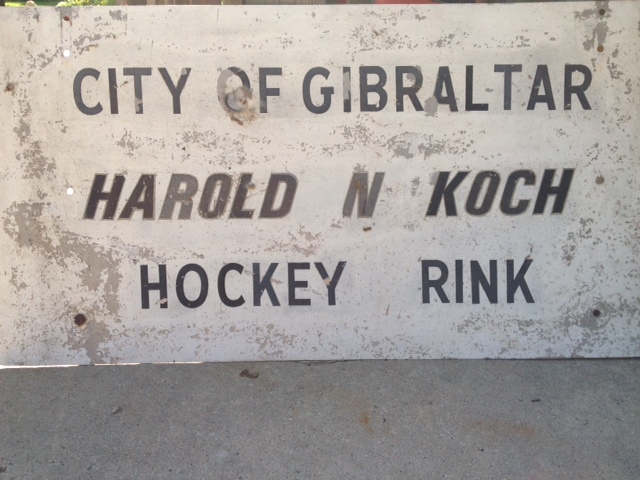 Growing up, I wasn’t much for the summertime sports. I played soccer, but never wanted to (my parents made me!), and couldn’t of cared less for basketball and baseball – or in my case softball 😛 I wasn’t an athletic kid to begin with, but certain things did get me to break a sweat. Swimming with friends in Mill Lake or rollerblading around the neighboring subdivision (since our roads weren’t -and still aren’t- paved) were always things that got me moving, but it was when the lake froze over that I really enjoyed myself. My childhood sports activity is summed up quite well in a statement made recently by Mike Kitchen as he talked about his own dealings with hockey: “And even though I’ve never had an athletic bone in my body, in gym class I excelled at floor hockey.” I played defense personally.

Back then, I didn’t understand why I loved playing with little rubber pucks or watching others do so (not that I really cared to question it at such an age) but, in learning the history of my father’s family, everything began to make sense. Now, my grandfather, Harold Koch, was a baseball fan – nothing would ever replace his love for that game. But another sport was held in his heart almost as highly and that sport was hockey. So prominent was his love for hockey that, in their hometown of Gibraltar, Michigan, the city named the local rink after him. And rightly so, considering he not only coached the players -of all ages- but built and maintained the rink as well! The rink has now been replaced with a police station, but the memory still lives strong in those who knew and loved him. 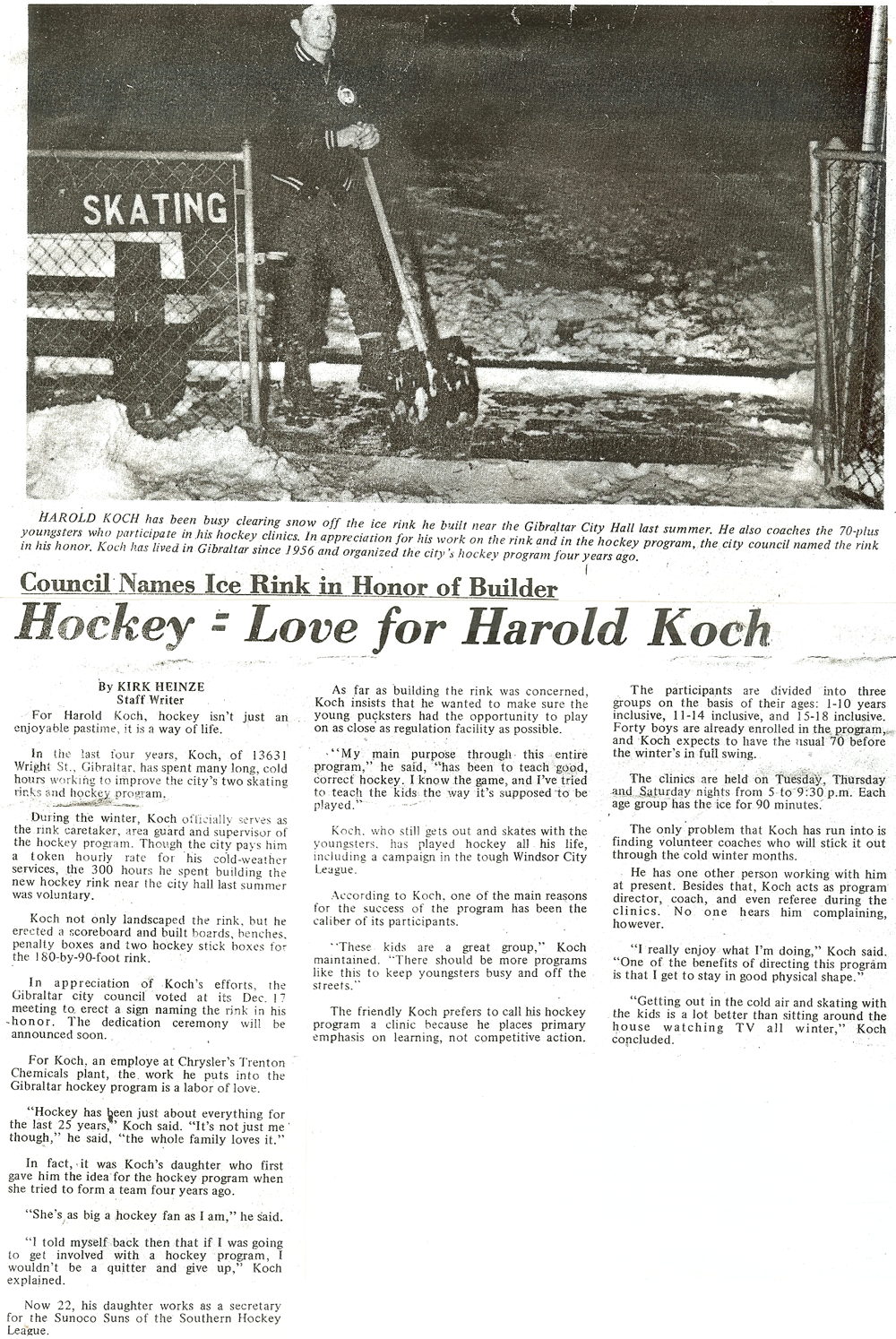 This love of hockey was also shared with his wife -my grandmother- and his kids. My father, although never playing for any professional teams, enjoyed playing with the local ones and just being a part of the sport in general. My aunt… she was another story. Not only did she play and play well (in the position of goalie), but she earned the right to call herself a hockey player after she became the first female professional hockey player when she signed a contract with the Marquette Iron Rangers for the 1969-70 season (part of the USHL, a senior hockey league at the time, now a top junior league). (There’s a lot more to my aunt’s hockey story, but on a personal family level we’ll leave it at that.) Sure, it wasn’t the NHL -which is apparently all people can think about when you say someone plays hockey professionally-, but most people seem to forget the atmosphere surrounding hockey back then. Abby Hoffman, who -at 9 years old- had already played most of a season by disguising herself as a boy but was then disallowed to play when they found out she was a girl, was the first to challenge the “boys only” policy in 1956 but was shot down by the Ontario Supreme Court. Women just did not play hockey “professionally” back then. People can bring up Manon Rhéaume all they like, but she was only the first woman to sign with the NHL (in 1992, 23 years after my aunt signed her contract) and not actually the first woman to play hockey professionally in a “men only” league (women’s “associations” have existed since 1922 but there weren’t any professional leagues until the early 1990’s). Of course, my aunt is almost completely forgotten by history (and she would quite prefer that actually), but her hockey legacy within my hockey heritage is quite important to me. 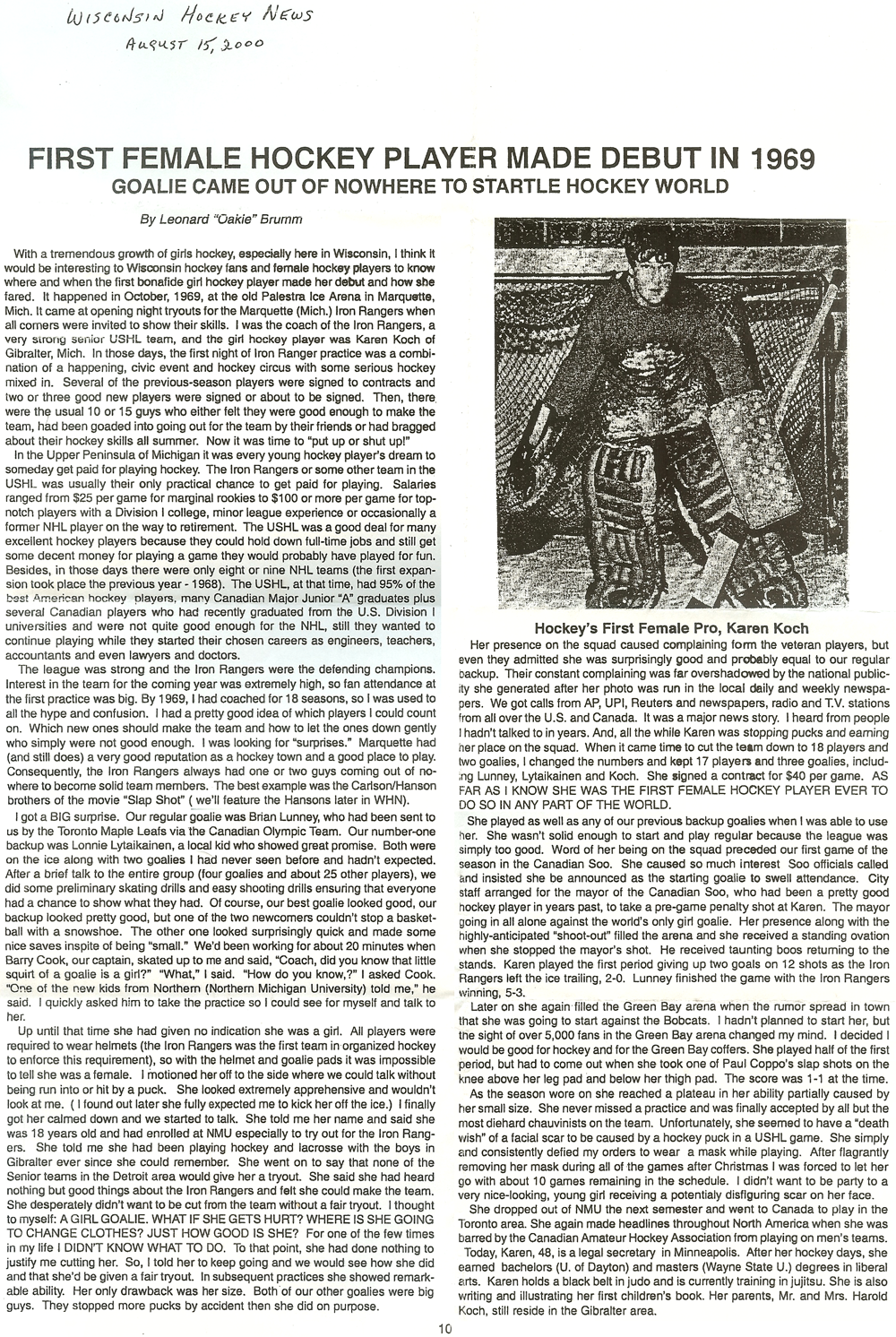 This all happened before I was born of course, but apparently it carried over into my system and I can still remember sitting in the garage with my dad when the Red Wings won the Stanley Cup in 1996-97. It is one of my fondest memories, one I got to repeat the very next year. I am completely jealous of my mother, though, because she worked at the airport the Wings flew in/out of and she was one of the first Detroiters to have the honor of touching Lord Stanley’s Cup upon its return to Hockeytown. So jealous! 😛 But, why the Red Wings? That’s easy = I’m a hometown kind of girl; I grew up just outside of Hockeytown – I grew up watching the Red Wings. And, as I was growing up, many a player stuck with Detroit and helped make Hockeytown what it is today. I might have only been a young teen, but watching the Wings come together and win the Stanley Cup, not once, but twice in a row made me proud to be from Michigan. That feeling was something I didn’t understand then, but I do now and I will forever return the favor by making all those who play on the Red Wings team proud to have done so. The Wings recently put in a lot of effort to say thank you to the fans for supporting them through the shortened season this year and the only thing I can say is thank you right back.

So yeah, needless to say, I love hockey and I have good reason too. I might not be one of those people who knows all the stats and every single rule change, but that’s not what’s important to me. I watch just for the love of the game, for the pride I have in being a fan and a part of its history. I will never stop being a fan of hockey; even if it’s just kids playing for fun on a frozen lake in the middle of winter. I never got to play with my grandfather but, in learning about his hockey history, he taught me not to love the stats or the trophies but the game itself. We love and miss you grandpa, and we’ll be sure to carry on the hockey tradition with our family’s newest generation. 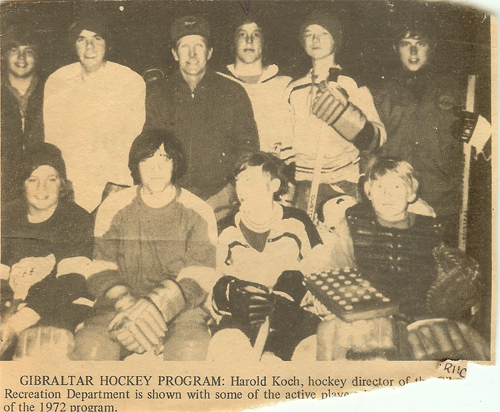 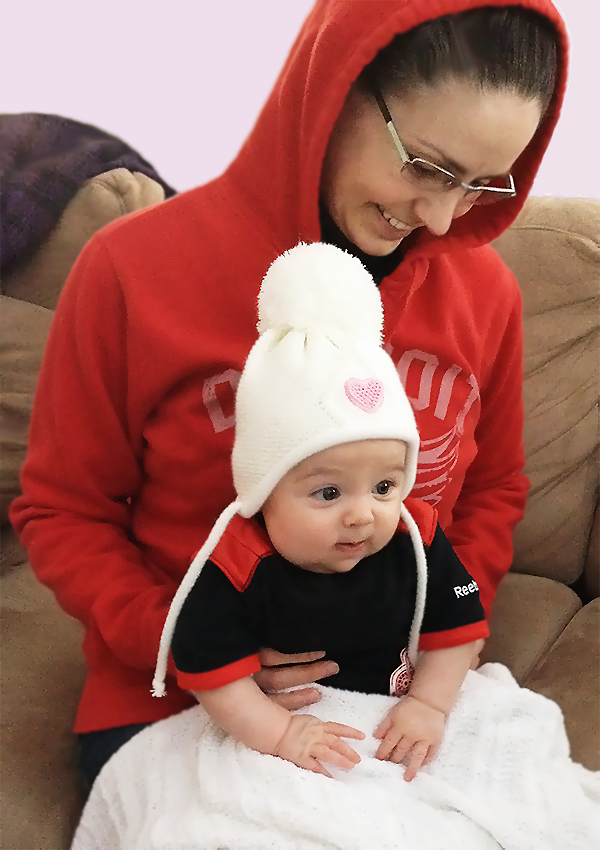 This entry was posted in Family and Pets. Bookmark the permalink.

4 Responses to My Blood is Red… and White. Hockeytown Baby!